Multiple myeloma is a plasma cell neoplasm.  The type B cells of the lymph cells that normally respond to infection and are found in the marrow grow out of control.    This tumor develops usually in the bone marrow and is referred to as a myeloma.  Therefore, more than one myeloma is considered “multiple myeloma”.   It is incurable with a mortality rate within one- three years.  It will affect the bones with most marrow such as the vertebrae, ribs, skull, pelvis and femur.

It can be overlooked as back pain or can be mistaken for an osteoporotic collapse.  Often frequent and persistent infection is involved as well as kidney damage and multiple myeloma can affect the nervous system with compression to the spinal cord and nerve roots.   A persistent backache with the loss of height needs to be examined closely.  Pain can be sharp, knife-like and moderate to severe.  It starts intermittent and progresses to constant.  Night pain, fatigue, and weight loss are also present.

Differential Diagnosis of the Spine Book 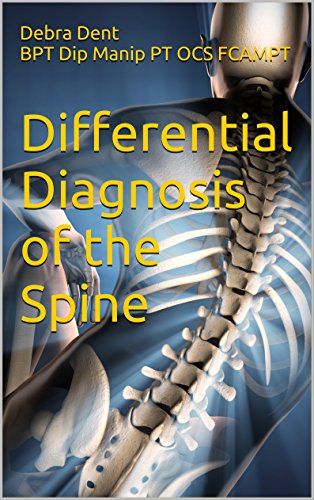 For a few days only from July 27 -July 31/2017, Differential Diagnosis of the Spine Kindle edition will be on sale to celebrate its one year anniversary. Check now as with each successive day, the price will increase until it returns to it present cost of 9.99. Please note, this will be in the Amazon.com and Amazon.UK market places. 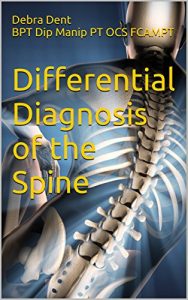 Differential Diagnosis of the Spine

Polymyalgia Rheumatica is a relatively common inflammatory condition that affects primarily people over the age of 50 and of northern European descent. It is rare in Asia and among black people. It is more frequent in women than men by 2 to 1. It is characterized by proximal stiffness and myalgia of the hips and shoulders. Classic morning stiffness is present and can last for more than one hour. Approximately 15% will develop Giant Cell Arteritis (GCA) and approximately 45- 50% of patients with GCA will have PMR.

The condition can have a relatively sudden onset in 50% with good health being noted prior to its onset. Stiffness and pain are noted in the proximal girdles. A classic sign is an inability of being able to rise out of a chair due to pain and stiffness. Being able to turn over in bed or raise their arms over their head is also symptoms of PMR. The phenomenon of gelling is noted after resting for over an hour or on rising in the am. There may be distal joint swelling and or edema. Patients will present with fatigue, low-grade temperature and distal swelling with pitting edema. They will have normal muscle strength and ROM of the shoulders and hips may be limited due to pain. Tenderness of the hips and shoulders may be present.

Diagnostic Criteria:
• erythrocyte sedimentation rate (ESR) will be greater than 40 mm/h.
• age over 50
• pain present longer than 1 month and involves two of the following areas- neck, shoulders and pelvic girdle.
• no other notable diseases present
• morning stiffness of greater than one hour
• Responds very quickly to prednisone treatment of less than 20 mg

Differential Diagnosis of the Spine Book

Test your knowledge of causes of certain types of head and neck pain.

Colors in your evaluation can be indicative of certain pathologies.

“Instructor made learning fun and interesting!”

- Testimonial
We use cookies to ensure that we give you the best experience on our website. If you continue to use this site we will assume that you are happy with it.Ok